Like always Tiobe Softwares has released rankings of programming languages and popularity of programing languages for the month of January 2009. The index is updated once a month. The ratings are based on the number of skilled engineers world-wide, courses and third party vendors. The popular search engines Google, MSN, Yahoo!, and YouTube are used to calculate the ratings. According to Tiobe few of the major gainer and loosers are

The index can be used to check whether your programming skills are still up to date or to make a strategic decision about what programming language should be adopted when starting to build a new software system. The definition of the TIOBE index can be found here.

The long term trends for the top 10 programming languages can be found in the line diagram below. 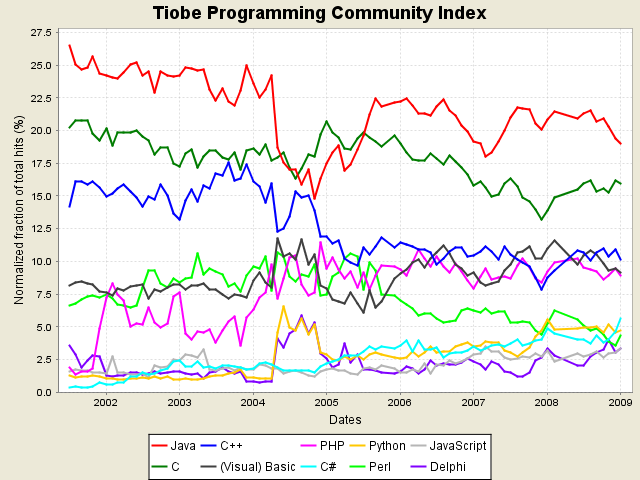 The complete top 50 of programming languages is listed below.

The Next 50 Programming Languages

The following list of languages denotes #51 to #100. Since the differences are relatively small, the programming languages are only listed (in alphabetical order).

The object-oriented paradigm is at an all time high with 57.6%. The popularity of dynamically typed languages seems to be stabilizing (see trend diagram below). 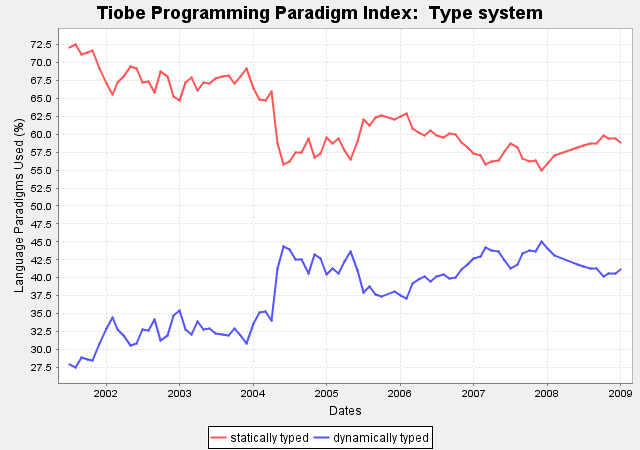 Well many people are criticizing their rankings and algorithm used to calculate rankings so its up to you to believe. Feel free to post your comments and your 2 cents of their ranking system. Do you think its proper or its based on assumptions?

If you’ve got any thoughts, comments or suggestions for things we could add, leave a comment! Also please Subscribe to our RSS for latest tips, tricks and examples on cutting edge stuff.