Testing tools often saves time and helps cutting testing time as web applications often suffers from bugs, inconsistent behaviors, usability issues, incorrect functionality, security issues and even the believed expectations of the customer. Its imperatively hard to determine bugs and fixes while development phase is in progress, keeping records drafting a bug sheet determining priority and severity will be a pain. Why not use automated test tools to test your web application. Following is a list of 10 web functional/regression testing tools for web applications in terms of Functional and Regression testing.

1. WATIR –Watir is a simple open-source library for automating web browsers. It allows you to write tests that are easy to read and easy to maintain. It is optimized for simplicity and flexibility. Watir drives browsers the same way people do. It clicks links, fills in forms, presses buttons. Watir also checks results, such as whether expected text appears on the page. Watir is a Ruby library that works with Internet Explorer on Windows. Watir is currently being ported to support FireFox and Safari. 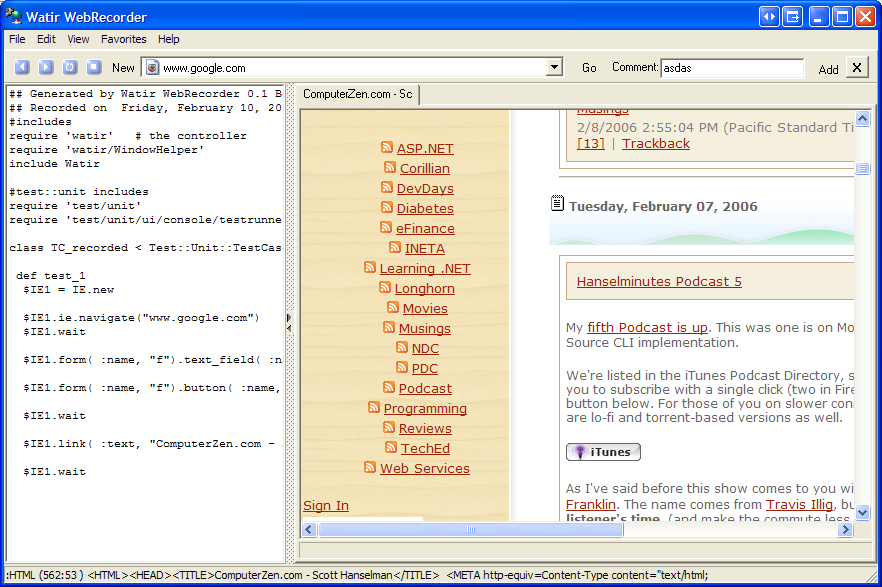 2. SELENIUM IDE – It is an integrated development environment for Selenium tests. It is implemented as a Firefox extension, and allows you to record, edit, and debug tests. Selenium IDE includes the entire Selenium Core, allowing you to easily and quickly record and play back tests in the actual environment that they will run. Selenium IDE is not only recording tool: it is a complete IDE. You can choose to use its recording capability, or you may edit your scripts by hand. With autocomplete support and the ability to move commands around quickly, Selenium IDE is the ideal environment for creating Selenium tests no matter what style of tests you prefer.

3. Q ENGINE – AdventNet QEngine offers integrated solutions to test and verify the functionality and performance of both web applications and web services. Features include: 4. MAX Q – It is a Web functional testing tool. It includes an HTTP proxy that records your test script, and a command-line utility that can be used to playback tests. The proxy recorder automatically stores variables posted to forms, so you don’t have to write that stuff by hand.

5. Solex – It is a free open source Web application testing tool built as a plug-in for the Eclipse IDE. It provides functions to record a client session, adjust it according to various parameters and replay it later typically in order to ensure non regression of the application’s behavior (with stress testing capabilities being added at a later stage). Solex acts as an HTTP proxy and records all HTTP requests and responses going through the wire between a Web client (e.g. a Web browser) and a Web server. The task of replaying a scenario consists in sending the previously recorded and eventually customized HTTP requests to the server and asserting each response.

6. SILK TEST – It is an automation tool for testing the functionality of enterprise applications in most versions of Windows, Sun Solaris 9 & 10, and Red Hat Enterprise Linux WS 2.1 & 3.0. It is produced by Segue Software which was acquired by Borland in 2006. SilkTest uses the proprietary 4Test language for automation scripting. It is an object oriented language similar to C++. It uses the concepts of classes, objects, and inheritance.
Features:

HP QuickTest Professional supports functional and regression test automation that addresses every major software application and environment. This solution uses the concept of keyword-driven testing to simplify test creation and maintenance. It enables testers to build test cases by capturing flows directly from the application screens using specialized capturing technology. Test experts also have full access to the underlying test and object properties via an integrated scripting and debugging environment.

There are various other products available in market today but i have compiled the list based on my experiences of various testing tools. Please post your experiences with these tools or you can add new ones which i may have missed. If you like this post kindly subscribe to our RSS for free updates and articles delivered to you.